The bridge towered above the expanse of water, the height terrifying when viewed from below. Odd, Danni thought. She felt comfortable up at the top now, whereas just minutes ago she’d known the heart-rending fear that must enshroud those about to jump. At least, that’s what she’d experienced.

The decisions that brought her to this place in time seemed of little importance now. Danni pondered the change in attitude. Why was she still standing here?

A noise startled her. A popping sound, then metal grinding before a dull thud of impact. Danni spun in time to see the car fold in on itself; the flames start to lick the sides before it devoured the contents like an insatiable beast. A small face pressed against the window, hands reaching out in supplication, eyes locked on hers in mute plea.

Danni yanked the door aside, mindless of the fire hissing in anger at her approach. The little girl melted into her arms as her mother scrambled out the other door.

“Are you an angel?” the child asked.

Danni found she couldn’t speak for the lump in her throat, settled on a smile instead. This must be why she still lingered. It was too late for her, but the child was safe. Danni ascended; comforted by the fact that at least in death her life had found meaning.

Squaring shoulders grown wide from Special Ops training, Dan approached his task with some trepidation. Smoke curled in a graceful arc before drifting outward on the breeze. He wrinkled his nose against the acrid smell before bending to his unenviable task. At times like this, he wished he wasn’t so qualified, but the others counted on his expertise. Best to get on with the job.

People shuffled nearer as the flames spat and hissed, curiosity drawing them at the same rate as the flies that now hovered. Dan looked over his shoulder and spotted Linda hanging back at the edge of the milling crowd. She raised one eyebrow, a mute question he’d learned long ago to interpret as a countdown.

He nodded his head in silent reply, going back to his observations. The fire licked at the charred flesh, hungry tongues of flame dancing in the late afternoon heat. Someone handed him a drink that he downed in one gulp, grateful for the cool shot to expunge the grit from the back of his throat.

“I don’t know how you keep track of so many. I know I never could.”

The speaker watched the flames with a gleam in her eye that Dan tried his best to ignore. Her avid attention reminded him of a hunter, stalking her prey. The thought made his stomach churn.

Linda diverted his thoughts by arriving at his side after elbowing through the crowd to reach him. She deposited her armload of items on the makeshift table beside him and kissed him on the cheek.

“I know this is an unpleasant task for you, being a vegetarian, but no one can barbeque steaks as well as you.”

Proofreading is a dying art...

This landed in my email box the other day. I don’t know who to attribute the newspaper headlines to, but they were too funny to keep to myself. The following also serves to remind us that proofreading should be a top priority. Our readers may not always interpret our words the way we meant them. I can’t take credit for the pithy comments under each one, either.


Man Kills Self Before Shooting Wife and Daughter
Quite an accomplishment!

Something Went Wrong in Jet Crash, Expert Says
No crap, really? Ya think?

Panda Mating Fails; Veterinarian Takes Over
What a guy!

Juvenile Court to Try Shooting Defendant
See if that works any better than a fair trial!

War Dims Hope for Peace
I can see where it might have that effect!

If Strike Isn't Settled Quickly, It May Last Awhile
Ya think?

Cold Wave Linked to Temperatures
Who would have thought!

Enfield (London) Couple Slain; Police Suspect Homicide
They may be on to something!

Man Struck By Lightning: Faces Battery Charge
He probably IS the battery charge!

Astronaut Takes Blame for Gas in Spacecraft
That's what he gets for eating those beans!

Kids Make Nutritious Snacks
Do they taste like chicken?

Local High School Dropouts Cut in Half
Chainsaw Massacre all over again!

Hospitals are Sued by 7 Foot Doctors
Boy, are they tall!

Typhoon Rips Through Cemetery; Hundreds Dead
Did I read that right?

I hope these brought a smile to your day.
Posted by Laura Eno at 11:28 PM

Julie entered the ancient elevator, struggling out of her coat while still managing to hold onto her briefcase. She jabbed at the number six button hard. It usually stuck and maintenance hadn’t fixed it for the past two months. It slid easily this time, causing her to hit the seven button as well.

They finally got around to one complaint. Julie doubted if Mr Townsend had done anything about the heat yet. That would cost him money, something he valued far above happy tenants.

The elevator creaked and groaned, making its slow journey up to her humble abode as if on its last strand of cable. This trip seemed to take longer than usual, but the lights over the door displayed their relentless trek, moving from five before winking out completely just as the elevator jerked to a stop.

Great – another problem. A burned-out bulb would be far down the fix-it list. Julie stepped into the hallway and froze. This wasn’t her floor. At least, it didn’t look like her hallway, even though she could see the door to her apartment. Had they painted today? The color was garish.

Whatever. She pulled her keys out and went inside, thankful to be home at last. Flipping on the TV for company, Julie listened with half an ear as the newscaster related some breaking news.

“Reports just in of an accident in the old Townsend building. A cable snapped on the elevator of the eight-story apartment house. It’s not known yet if there were any injuries…”

A knock drowned out the rest of his sentence, just as the name of the building sunk in. Puzzled by the reference, Julie answered the door. A handsome man stood in front of her, his white suit stark against the newly painted red walls of the hallway.

“Julie – I thought I’d stop by and personally welcome you to the 13th floor. If there’s anything you require, just let me know, since you won’t be leaving again.”
Posted by Laura Eno at 6:06 PM

“I’m no longer attracted to you.”

“What’s so unattractive about me?”

“Ha! Where do I begin? You never dress in anything other than shorts and your nose…never mind. You’re also too short for my taste.”

“What? I’m the same height as you. That never used to be an issue. And what about our mutual friends? What do I tell them?”

“I don’t care what you tell them. They’re your friends – a bunch of quacks, if you ask me – not mine. My new man hangs with a different crowd – mysterious and exciting.”

“So, what you’re saying is that you prefer a mysterious man in spandex to a guy with big ears and nose who wears shorts? Tell me, Min – what does Spidey think about that stupid bow in your hair?”
Posted by Laura Eno at 8:09 PM 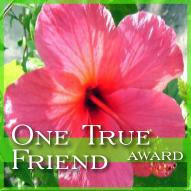 I’ve been trying to wait until the dust settles before awarding this, but…call me impatient. I had purposely left someone off of the Kreative Blog Award list, intending to present this to her on the following day, but she received that award from someone else so I held back and continued to collect information about her.

I have saved this One True Friend Award to feature a very special person, Tomara Armstrong of This, That...The Other Thing

Its purpose is to focus on the person behind the blog, highlighting his/her qualities as an honest, true friend. The only rule of this award is to pass it on to someone who has made a difference in your life.

Now for the fun part, where I list 2’s remarkable qualities.

1. …can take out (cardboard) bad guys with the skill of Chuck Norris. I have personally witnessed the (bloodless) aftermath of that spectacle.

2. …turns into a ninja when confronted by ostriches.

5. …laughs at all of my jokes (an amazing feat all by itself).

6. …can spit without fouling her spurs.

7. …has managed to integrate into her new locale without resorting to murder yet (although I don’t know the particulars that precipitated her move from the last location).

8. …managed to leave comments and RT messages even in the midst of moving across several state lines.

9. …is a powerful writer with wonderful stories on her blog.

10. …But most importantly, she’s an amazing friend for anyone to have. Follow her – she’s great!
Posted by Laura Eno at 1:08 PM