The Blogging from A to Z April Challenge is Back! 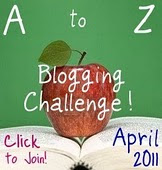 Arlee Bird over at Tossing It Out is bringing back his April challenge - blogging Mondays through Saturdays in April with a different letter of the alphabet each day. As he says:
"You can post essays, short pieces of fiction, poetry, recipes, travel sketches, or anything else you would like to write about. You don't have to be a writer to do this. You can post photos, including samples of your own art or craftwork. Everyone who blogs can post from A to Z."
I'd like to see the #fridayflash group involved in this. Go read Arlee's full post here...I'll wait. While you're there, sign up for it! I know that Rachael Blackbirdsong of Ravenwood has already done so. I'd love to see many more of you signed up...perhaps with artwork or haikus? Short stories or recipes? Yeah, you know I'm talking to you.
To make it really interesting for myself, I'm going to incorporate my #fridayflash into it as well. The Fridays are the letters A, G, M, S and Y, in case you're wondering.
Join in the fun!
Update: Fridayflash people who've joined the fun! (If you've joined, leave me a comment and I'll add you here)
Jim Bronyaur
Rachael Blackbirdsong
Kevin Mackey
Pamela Jo
Posted by Laura Eno at 7:23 AM

This was first published at 10Flash in Oct, 2009 so I thought I'd recycle it. I hope you enjoy it for the first (or second) time!


“How bad are you hurt?” They waited, crouched behind some metallic thing that Eddie called a ‘dumpster’. The smell made Tom want to puke.

“My arm feels like it’s on fire. I think the bullet’s still in there too.”

“Bullet? As in ‘metal projectile’? Geez, Eddie. You said we couldn’t get hurt. That’s the only reason why I took this hare-brained trip with you. Why’d you think that robbing a bank would be fun in the first place?”

He’d been on a few adventures before with Eddie. They’d climbed Mount Kilimanjaro just last month, throwing snowballs at each other once they’d reached the top. So, when Eddie suggested going to 20th century New York to rob a bank, Tom thought it might be fun.

Eddie’s voice wheezed with pain, his breath rapid and shallow as they watched the cops run down the alley searching for them.

“Come on, before they turn back again. We’ve got to find a better hiding place.” Tom helped Eddie to his feet.

They picked their way through debris that seemed permanently attached to the concrete, checking every doorway they came to. Finally, one opened for them. The cool shadows were a welcome change from the sultry heat outside. No one seemed to be home.

“So how do we get out of this scenario, Eddie?”

“I’m not sure. I think the program has to run to the end.”

“You’re not sure? Didn’t you read the instructions that came with the machine?”

“I glanced at them when I first got it, but that was six months ago.”

Tom threw his friend a disgusted look. “I thought you said you couldn’t get hurt with this Time Game machine, so how’d you get shot?”

“I turned off the safety,” Eddie admitted. “I thought it’d make the experience more realistic.”

“What?” Tom noticed Eddie’s face turn the same shade of red as his hair. Small consolation.

“Well, remember the time we went diving in the coral reefs? You ran out of oxygen and the whole program froze until you changed your tanks? It was kind of disruptive, don’t you think?”

“Yeah, it was, but I lived to complain about the glitch. That’s why the machine has a safety! Oh, never mind about that right now. You’re the history buff. What do you know about this place that might help us get back home?”

Eddie shrugged, wincing as the movement shot pain through his arm. Tom watched the blood drip onto the floor.

“We’ve got to get you some help before you bleed to death. Do you remember how this program ends, or did you even read it all the way through?”

“I read it. I think we’re supposed to meet a stranger or something like that. Okay, I only glanced at it. I’m sorry. Next time I’ll read the whole thing, all right?”

“If there’s a next time, I’m doing the picking – like Australia in the good old 23rd century.” Tom sat on the floor, contemplating what their next move should be.

The door swung open, spilling light into the room. A massive shadow quickly replaced it.

Eddie could only gape at the large man, but Tom managed to find his voice. “How did you know that?”

“Simple. I represent the company that wrote the program ‘20th Century Bank Heist’.”

“No, of course not. However, we are alerted each time it’s played with the safety off. Personally, I’m amazed at the number of people who don’t read the alternate endings, always included with the game, I assure you.”

As the stranger’s eyes began to glow, Tom suddenly realized that bullets were the least of their worries.
Posted by Laura Eno at 1:58 PM

I have an author interview today over at A Moment With Mystee. You want to know more weird stuff about me, right? Grab a piece of virtual chocolate from the sideboard and come join the fun!


While you're there, have a look around. Mystee has interviews and reviews galore!
Posted by Laura Eno at 9:04 PM

Email ThisBlogThis!Share to TwitterShare to FacebookShare to Pinterest
Labels: A Moment With Mystee, interview

Beverly woke to the sound of a strange voice speaking right next to her ear. She would have flinched except for the fact that she seemed frozen in place, her body immobilized.

Her eyes slowly focused, as if they'd been open all along but not seeing. A bright light hung overhead—too bright to be anything in her house.

Where was she? A body came into view; a white jacket hung inches from her nose. A tiny light flicked back and forth across her face. She tried to close her eyes against the pain it caused, but her eyelids didn't cooperate.

A hospital…she tried to tell the doctor that she was awake but her lips didn't move. No sound issued from her throat either. A spark of panic lodged in her brain when Beverly realized she couldn't even shift her eyes from side to side.

Had she been in an accident? The last thing Beverly remembered was window-shopping in front of Hardy's Department Store. After that…nothing.

A withered arm came into view, flaccid and covered with age spots, as they strapped a wristband to it. The tag said Doe, J.

The doctor still spoke as if she couldn't hear him. "…patient looks to be approximately eighty-five years of age."

Beverly silently screamed into the abyss of the nearly dead.

All eyes followed her entrance, but Darla was used to stares. She soaked up the admiration from the male contingent and ignored the daggers that seemed to spark from the female eyes.

Her green silk gown complimented her dark hair, making Darla the best-dressed woman at the party. The men circled around like moths to a flame, the atmosphere charged with possibilities as she danced with one after another.

She accepted a glass of champagne and drank to new beginnings, determined to leave her old life behind and start anew.

"Hello, police department? This is the manager of Hardy's Department Store. No, I'm not calling about the woman who collapsed outside the store yesterday. I'm calling to report a missing mannequin. She has dark brown hair and wore an expensive green silk dress…"

Runner-up, or second place, can mean different things, depending on the context. In my case, I have a long history of almost winning.

The last beauty contest I entered, for example, was a farce. The winner was inferior to me in every way, but the judges were biased towards her. I will admit she had an unfair advantage over me, but I was taught to be gracious.

No more. This contest means life and death. No one will have the favoritism I've become accustomed to. I mean to have the surgical enhancement necessary to win.
Do you think that's cheating? That it's not an honest way to win? You might think differently if you had my face.

Genetics shouldn't play into this, but it does. It's not my fault that my human ancestry gave me only one nose. The Denebian judges are partial to two noses and since they are the ones overseeing the contest, I have no choice.

Monday at dawn, they will announce the winner. Right after the ceremony, the runner-up will be barbecued for the banquet.

I'm being interviewed today for the Writers Talk segment by John Hayes of Robert Frost's Banjo. It's an eclectic site with writer interviews, music, poetry, trains and beautiful photos. Drop on by and say hi!

I'm very excited about the insightful review that Cecilia Dominic has posted for Don't Fall Asleep over at Cecilia's Random Writings. I'd be honored if you gave it a read!